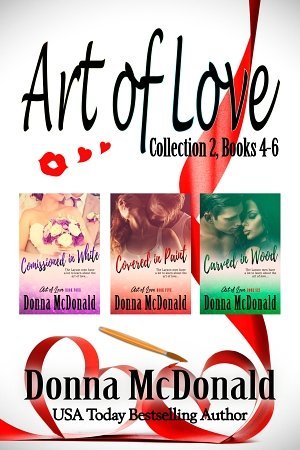 Three more books in the ART OF LOVE series are now under one cover!

COMMISSIONED IN WHITE – What do multiple weddings finally getting to happen, a new career for Ellen, and an art gallery opening have in common? They’re all in this light-hearted addition to the Art of Love series. Packed with lots of resolution and the wobbly path to matrimony for some of Larson brides, this romantic comedy about weddings will have you laughing from beginning to end.

COVERED IN PAINT –  In 42 years of living, Drake has seen the best and worst life has to offer. He has loved and lost a wife. He has managed to raise his son alone. But now all he can think about is a woman who is way too young for him. Dr. Brooke Daniels has an enticing body, a kiss-me mouth, and a sharp gaze that questions all the excuses he tries to make.

CARVED IN WOOD — He’s obsessed with his art and with a woman who doesn’t want to love him. Maybe he should be grateful. Without the constant frustration, Joseph McEldowney figures he might never have answered any artistic urge to express his emotions. Now carving life from wood is all that soothes him. Too bad he can’t carve out a place in this world where nothing matters except the heaven-sent pull he and Jillian Lansing have towards each other.

Brooke hastily shoved her feet into her heels when the doorbell rang. She hustled to the living room, halting when she got a whiff of cologne. It smelled like…Drake?

Shocked at her reaction, she sniffed again. Yes. Definitely Drake.

Feeling guilty that the man at the door wasn’t the one she was now wishing for, she shook her head in denial as the doorbell sounded again. With one hand on her stomach to quiet her nerves, she opened the door with the other. She was speechless when she saw the man standing there.

Unable to speak, all he could was stare at her. Brooke was dressed in a short black dress with bare legs and tall heels. Instead of speaking, he held out the triple bunch of roses.

Brooke was breathing nervously, trying to figure out what to do about the fact that Drake was there when he shouldn’t have been. She took the flowers just to get them out of the way. “Thank you. I would invite you in but I’m…expecting someone.”

Drake rubbed a hand across his face. “He was here already…but he left.”

“Why? What did you say to him?” Brook demanded.

Drake ignored the question and stepped across the threshold without an invitation. “You probably want to put those flowers in water. Roses don’t last long otherwise. I’ll wait.”

“Wait for what?” Brooke demanded, closing the door harder than she intended.

When she turned around, Drake had stepped close. She backed up, but the door stopped her retreat from him.

“I’m waiting because we need to talk,” Drake said softly. “Even if talking is not really what I want to do right now.”

“We don’t need to talk. We have nothing to discuss,” Brooke denied, using the bouquet as a floral shield.

Drake considered his options and discarded all but one. He couldn’t out debate Brooke. Her mind was too sharp. All he could do was give her more to think about.

“Maybe we can find something to talk about…after we do this…,” he declared. Drake grabbed and tossed the expensive bouquet across the room and into a chair.

“Hey…” Brooke complained, as the flowers left her grasp.

Not willing to give her any real chance to talk him out of acting as irrationally as he’d decided to act, Drake stepped into Brooke’s body, his mouth hot and demanding as their well-matched forms lined up perfectly. Hard slid against soft, just as it had the first time he’d kissed her in her mother’s kitchen.

In contrast to his demanding mouth on hers, Drake slipped his hands around Brooke’s waist slowly, letting her feel the gentle forward slide of his fingers before they slid low and pulled her hips tight against his. His body revealed the truth of his intentions to both of them as he surged and pressed her into the door while she groaned and arched against him.

He broke off the kiss, dragging his mouth from hers. “I ran off your date,” he whispered.

Drake snorted. “Of you course you understand. You’re just afraid of admitting it. Brooke, I can’t bear the thought of you with other men. If you have any other relationships—sexual or otherwise—damn it, end them.”

Brooke shivered at his command. “Why should I?” The zipper on the back of her dress slid down swiftly as his mouth covered hers again. 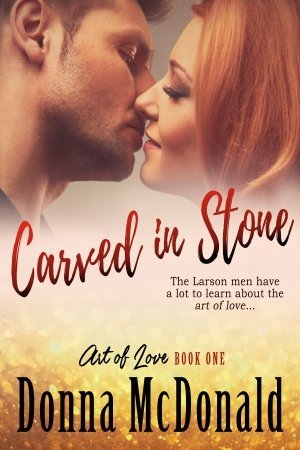 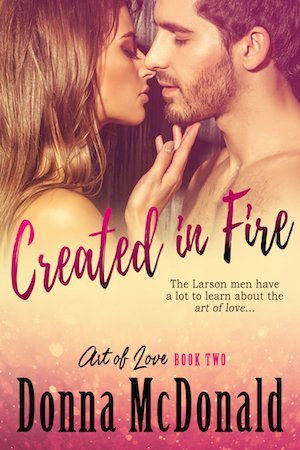 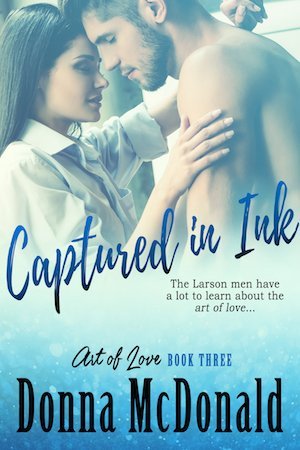 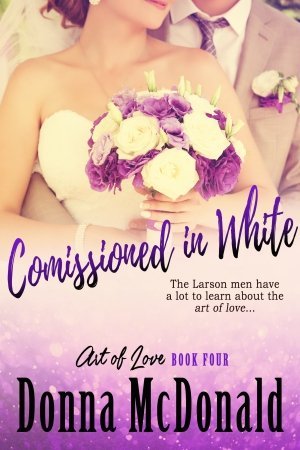 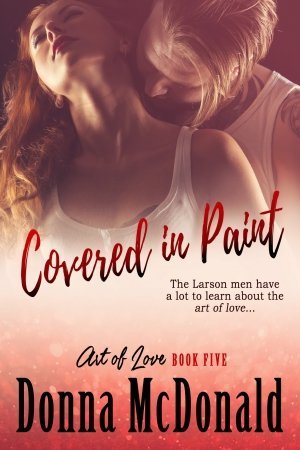