I’ve been invisible a lot this year. I just wish it was because I had developed a superpower. Unfortunately, I’ve just been completely taken under by personal life events.

I moved an entire household twice in July. Once was to vacate my apartment. The other was because my house sold six days after I spoke to the most amazing realtor I’ve ever met–lol. We didn’t even get the house officially listed in the normal sense. Do you know how hard it is to schedule an army of contractors in only three weeks? 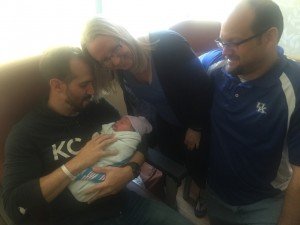 Anyway… as if that wasn’t enough to keep me hopping daily, my fifth grandchild decided to make his entrance into the world earlier than expected. Luckily, he at least waited until I was between moves. His earlier than scheduled entrance led to Bruce and I sleeping in my car in the hospital parking garage all night while waiting for him. I didn’t want to miss his arrival. So far, I’ve managed to be present for the births of all of my grandchildren.

My invisibility on all social media and my blog are because I’ve been putting in long days and falling asleep exhausted at the end of them. Yes, I’ve been wishing over and over that I was thirty again but that’s obviously not going to come true. Thankfully my house closing is now behind me and my new grandson is home with his parents. Did I mention I found out my daughter will be having grandchild number six next Spring? Yes, she’s not been feeling all that well lately.

All I can do about the busy-ness is sigh. Everyone is doing fine. I know I am a very lucky woman.

In upcoming weeks, I hope to be back to writing full-time and not trying to squeeze in a hour or two between other tasks. Apparently, the four and half months of my mother’s hip replacement earlier this year wasn’t enough of a life lesson about how much writing means to me.

Will someone please help me let the powers-that-be know I’ve got it now? I swear I will never take being an author for granted. I’m already back to work.