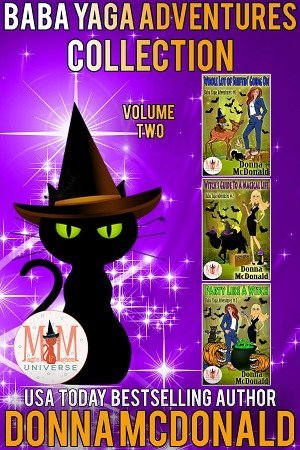 It’s not easy being the two most powerful witches in the world. Find out how Carol and Hildy do it In this collection of light paranormal romantic comedies!

Now you can get all three stories in the Baba Yaga Adventures series in this one convenient collection.

Being a Shifter Whisper is the life Hildy chose to devote her witch power to, but it hasn’t worked out like she’d hoped. What happens when you’re the ultimate Shifter Whisperer and you can’t solve a simple shifting problem? According to the Baba Yaga, the Goddess Morgana, and Gaia, every shifter in the world will be doomed if she fails.

The Baba Yaga job didn’t come with a witch’s guide to a magical life. How did her predecessors do this job without zapping everyone in sight? Carol has no freaking idea, but now she’s under orders from the former Jezibaba to pick a warlock posse to help her before her familiar is released. Why can’t people just back off and let her do the job her way?

It’s like old times again. The Baba Yaga is throwing an All Hallows Eve party to lure a vampire maker out of hiding and she’s using Hildy as human bait. All Hildy really cares about is that there are a bunch of coffins littering her backyard. What is she supposed to do with vampires? Bat shifters, Carol calls them, but Hildy thinks that’s a bunch of bull crap—or rather, guano.

What is the Magic and Mayhem Universe? Here’s what the author says…

Check out Robyn’s original series that began the Magic and Mayhem Universe. CLICK HERE to visit the website.