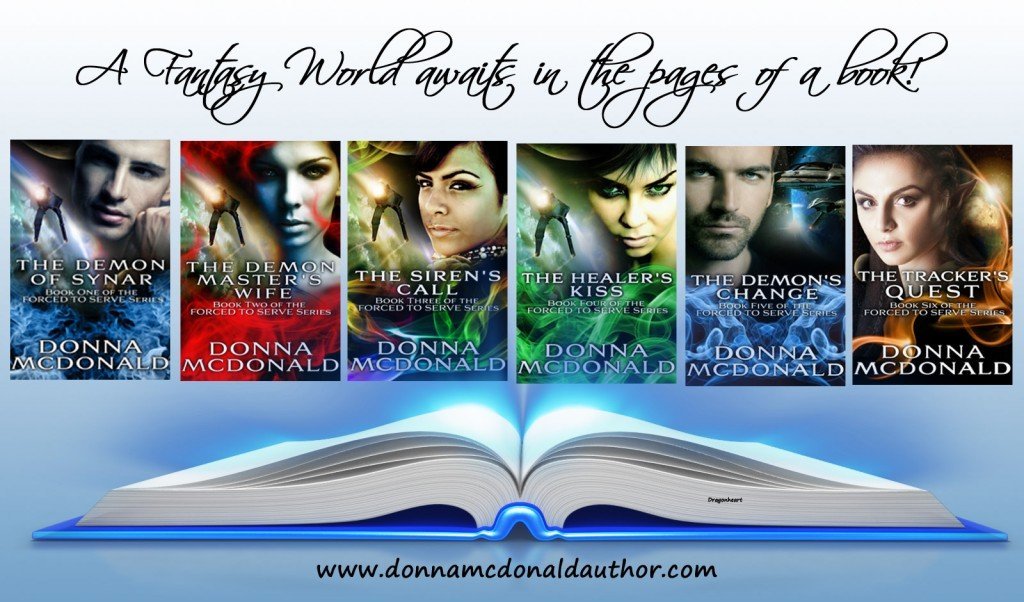 Sometimes I get looked at strangely when I announce I write romance novels for a living, but that’s nothing compared to the blinking silence that follows admitting I write science fiction romances. These two genres merge well for me, just as they did for male Sci-Fi creatives like George Lucas, Gene Roddenberry, J. J. Abrams, Josh Wheddon, and many others (the list is long). I can’t claim to have Vulcan logic as a gift, but blending the two genres seems quite logical.

I would insert my evil villainess laugh here if I had one. Since I don’t, I’ll just repost an interview I did for The Happy Nerd blog–brainchild of fantasy author (and happy nerd), John Marco–about blending sex and science fiction. We met because John’s wife was reading my contemporary work at the time and suggested John contact me about doing an Indie Spotlight feature. John and I instantly connected over our dual love of fantasy and science fiction. We’ve been author friends since.

(HOT Tip — John has a new fantasy book coming out in November 2015. Here’s a link to an excerpt if you want to check it out. I’m hooked.)

Why I will always claim the romance genre, even with science fiction and fantasy

My book plots are at least 50% dedicated to the romance. As an author, I like exploring how letting the right or wrong person into a character’s life (and bed) can change his or her outlook and reactions to everything. Something about the process of helping characters find and make personal connections fascinates me enough to write about it over and over. I carefully craft both their out of bed and in bed time with equal writer enthusiasm.

I choose to categorize my books in the romance genre primarily because I unapologetically seek a happy ending. Since Star Wars managed it with Leah and Hans, I have come to expect all my science fiction and fantasy to do it. From my perspective, real life is hard enough. In my fiction, I want a happy ending. Since this is my reader preference, I don’t think it’s any surprise that it ended up my writer one.

What makes each Forced To Serve story a true “romance” is the amount of emphasis put on the relationship in the story. Okay, it’s also the fact that I have a lot of sexual content in them. Well, okay—maybe not “a lot” by recent bestselling book standards—but I definitely include sex scenes unabashedly. Each book is crafted to explore the romantic and sexual relationship of the main characters.

Where science fiction comes into my work

Over half of my 30 published books are classified as contemporary romances, and are romantic comedies. However, my writing roots are actually in what used to be lumped under an emerging romance genre back in the 90’s called “paranormal”. This label predates the sub-genres of Science Fiction Romance which is the label I think most closely fits the Forced To Serve series. Recently, I began another SFR series called Cyborgs: Mankind Redefined.

Why do I write Science Fiction? I grew up watching Star Trek. I got married when Star Wars first came out in the 70’s. Now many years later, I am still watching those shows with the same fascination. In 2011, thanks to my book editor at the time, I also joined the ranks of other Browncoat fans grieving the cancellation of Firefly.  I think there is a definite Firefly-esque feeling to the relationships among my spaceship crew members. It’s make me happy to think my books are an echo of such great shows.

Sexual relationships provide a literary means to talk about issues of control, exercising power, and making commitments. There is also the spiritual push in a character to honor certain sexual traditions, such as celibacy or a total lack of discretion. The main couple’s sexual relationship allows me to show that physical connections can be taken casually by both genders or equally seriously by both genders. Through sex I can explore biological imperatives and/or blow them away. I like getting to explore the selfishness or selflessness of my character when giving pleasure to his or her partner. I think it’s interesting what that says about a person’s overall “goodness”. 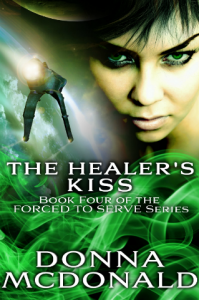 To illustrate how I typically use romance and sex within the story, here is a little snippet from The Healer’s Kiss, which is Book 4 of the Forced To Serve series. This snippet actually features the Book 3 couple. In a scene leading up to this one, a visiting alien entity on the ship has frozen several crew members during a conflict. When the entity is defeated, Lt. Dorian Zade is one of the first to escape his frozen state. He has a panic attack when he sees Commander Gwen Jet, who is his mate, is still frozen. He immediately thinks she is dead. Hours later, when the danger has mostly passed, he is still having emotional problems about the close call.

Smiling at her pleas to spare her clothing, Dorian slowed his hasty struggles, flicking open the fasteners with slow, deliberate intent instead. He liked the way Gwen quivered with every brush of his fingertips against the new skin he revealed in the process.

Falling to his knees, he worked the pants over her rounded hips, down thighs that enclosed all the delights a male could ever hope for in any life.

When he had to stop tugging to unclip the thigh holster for her weapon, Dorian felt his hands trembling again. Raging fires of Helios, the warrior in her always called to him to be conquered. It was all he could do not to throw her on the floor and unleash the anxious Siren side of him wanting physical proof she still lived.

But with his memories of their mating week now restored, Dorian knew with startling clarity now that he was the first bonding partner Gwen Jet had ever let have any control over her. They hadn’t even gotten a chance to discuss that yet. Knowing they might never have shook him to his core. The swift change of fierceness into tenderness brought a sweep of compassion so encompassing that it threatened to dissolve him into a puddle at her feet. Nothing would scare his warrior mate more than to know he wept over her.

Leaning his forehead against Gwen’s belly to soothe his spirit and to reassure her of his desire, Dorian whispered a prayer to the Creator’s for his mate’s continued safety. Then he simply refused to think anymore about the possibility of losing her, even though such a threat was always going to be a reality for as long as they served on the Liberator.

Next in the story, the scene gets really good from a romance perspective, but definitely beyond the PG-13 standard I strive to maintain in blog posts.

Certainly you don’t need this kind of intimate scene to show an alien world, the details of the mission, the larger conflicts they must resolve in rescuing someone, nor the hierarchy on the ship. But I think what this scene does for readers, especially those who enjoy romance, is to illustrate emotional risks of the characters. Instead of just mentally assuming Dorian is going to be devastated if Gwen dies, my readers get to share how he is feeling about it. This particular couple has a complicated history, spread out over Books 1-3. Gwen was captured during a mission in Book 2. Dorian ended up kidnapped by black market traders in Book 3 and Gwen had to go rescue him. This little scene in Book 4 is actually going to reassure those who have followed the couple from mission to mission and book to book. It is also going to validate that these characters love and care for each other.

It is always my intention to use the romantic relationship as just part of each character’s daily life (like it is for us) and as a aspect of their character (romantic partner, good father, understanding friend). In a typical romance novel, a character is defined by how they handle emotional connections. The physical is used to illustrate the depth of connection, but to me, the sexual relationship can be just as revealing about personality. Are they a control freak? Are they laid back? Are they generous with giving pleasure?

The gut reaction of most is that romance is a woman’s genre, but that has not been the case with my work. I find that the interest in relationship crosses genders. I’ve estimated from comments, email, and social media connections, that at least a third of my readers are men. They are reading me either because of or in spite of my adherence to the typical romance genre requirement of an HEA (happily ever after) ending.

Everyone who reads my work knows I intentionally pair up couples by the end of most books. The only exception is in the science fiction stories and concerns the primary couple on the ship. The story of Captain Liam Synar and Peace Keeper Ania Looren spanned both Books 1 and 2. Initially, I did that because I did most of the world building in Book 1. But when I got to Book 2 I realized this couple’s relationship destiny was going to be a driving force in the series and affect everyone else in every book. Since George Lucas took three movies to get Leah and Hans together, I figured taking two books to resolve Liam and Ania’s relationship was probably okay.