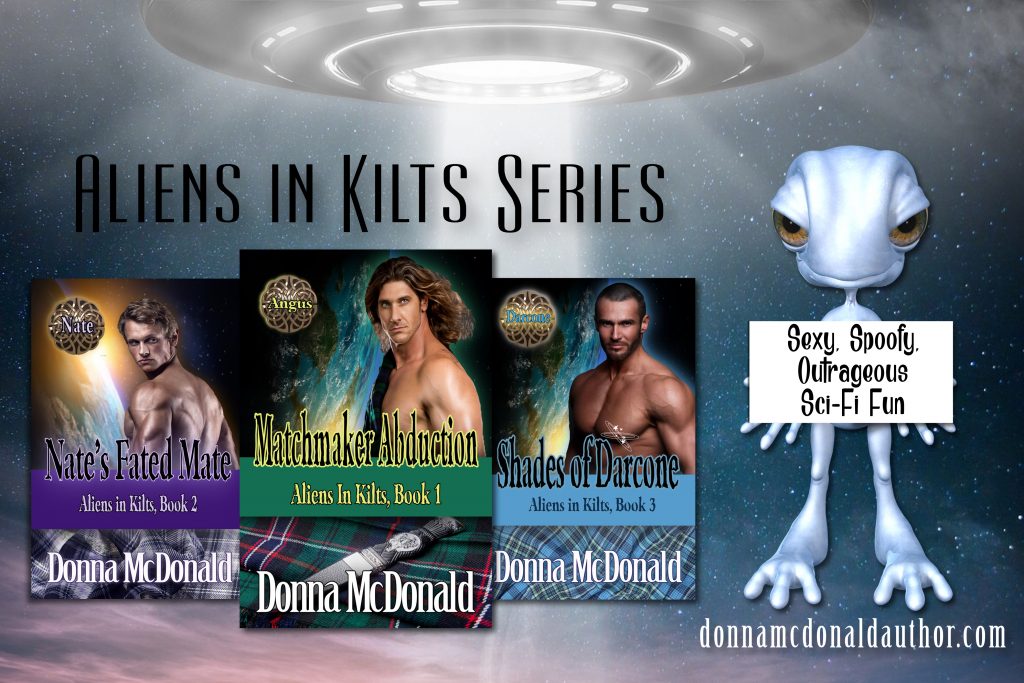 Aliens In Kilts is the silliest, spoofiest, craziest series I’ve written, and yes, I’m making fun of alien abductions, as well as every other SciFi trope out there. Sorry Whovians, Trekkies, and those who have the Force strong within them because my Irish hero and heroine have no idea about any of that.

Angus MacNamara and Erin O’Shea are ground up technophobes from the 1950s who are trying as hard as they can to catch up. That’s not easy when they’re dealing with time travel, space portals, growling aliens, and knowing that nearly everyone they meet is keeping secrets from them. Add in the expectation to use their matchmaking skills to run a dating agency set up to keep Earth from being attacked and you get a real mess

It’s hard to fully explain the humor in these books, but if like movies like Galaxy Quest, Spaceballs, or more recently Guardians of the Galaxy, then you’re going to like this series.

The stories do have a bit more language than usual… but in my world, as well as in the one that abducts Angus and Erin, I prefer to think Irish swearing doesn’t count. Their passion sets them apart.

These might possibly be the funniest action and adventure stories I’ve ever written. Get your copy of Matchmaker Abduction and see if you agree.

END_OF_DOCUMENT_TOKEN_TO_BE_REPLACED

I’m really excited to get this action-packed adventure series into the hands of the thousands of readers who subscribe to KU. This is a perfect binge series for KU readers. Each romance is unique. Each cyborg’s struggle to find his or her humanity is full of both torment and triumph. There’s lots of humor. And there’s a new release on the way.

Yes. Book 6 is absolutely going to finish up the running “big bad guy” storyline (kudos to Josh Whedon for that). Believe me, you’re going to need closure when you read this one. However, Nero 1000 is not going to be the last cyborg book for me. I don’t know if I’m going to write more of this series or start a new one, but I’ll be writing more cyborgs one way or another. Stay tuned…

It’s Time For The Madness To End

Locked in the cage of an insane cyber scientist who calls himself Creator Omega, Nero waits for his captor to decide his fate. Having seen the horror of Creator Omega’s failed experiments, Nero know his body is about to be cybernetically changed. Even so, he’s not sorry he traded himself to free Aja Kapur. He would do it all over again to save the woman he loves, even if Aja might have to one day kill the cyborg he becomes.

END_OF_DOCUMENT_TOKEN_TO_BE_REPLACED

Some Books Are Now Available In Kindle Unlimited

What a crazy summer it’s been! When I surfaced in August from helping my mother heal from a May fall that put her in a wheelchair, I had to take some drastic measures to recover my writing. The biggest one is to make a good portion of my work available in Kindle Unlimited. The last time any of my work was in KU was later 2016 through early 2017.

The upside is making the books available to the KU audience of readers. I’ve gotten many questions about when or if I was ever going to do this. When I recently looked at two year’s worth of links clicked in my pre-order and release emails, the Amazon clicks vastly outnumbered the other retailers by something like a 100 Amazon clicks for every 3 clicks elsewhere. In other words, the majority of people on my email lists are obviously Amazon users. I don’t know how many of you are Kindle Unlimited subscribers, but I imagine quite a few are.

Here are links to the series that have already moved into KU (just the SFR ones so far). More will be added in the future.