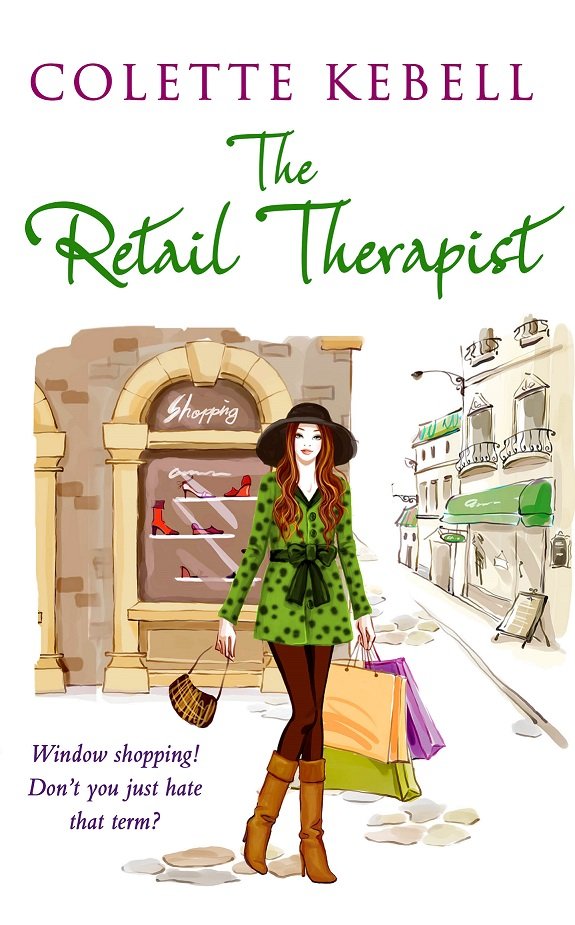 It is like going into a sweet shop and not being able to buy anything, or not knowing what to buy first. That is exactly my line of business, helping people make the right choice.

I’m one of those fashion consultants that are so popular nowadays amongst the upper crust, although I started ages ago. Choosing the right clothes for the right occasion is not an easy task: the dress has to match your personality and, if it can, enhance it.

This story is about how I abandoned the rat race, spending days in a legal office, and followed my dream of becoming a fashion consultant.

I believe I’m something more though, I’m a Retail Therapist and I’m sure you are itching to know the story about how I started and how I helped my clients look fabulous!

So, what are you waiting for?

Visit Amazon UK (UK) or Amazon US (US) to enter the mysterious world of a Berkshire Retail Therapist girl.”

Excerpts from The Retail Therapist

“I got distracted by a tall, handsome guy with long, dark hair by the entrance, busy looking at himself in the mirror. He was wearing a nice grey cardigan, unfortunately paired with rust-coloured jeans that didn’t quite cover his ankles, no socks and a pair of designer shoes in electric blue. The shoes themselves were stunning, but the whole ensemble was just plain awful.

“Hey, have a peek at the Snow White ‘King’ down there. I could swear he just said ‘Mirror, Mirror on the wall…’,” I said.

Ritchie and Johnny looked at each other and started laughing, “That, my dear, is your date.”

Prince Charming spotted Ritchie and waved. I was doomed.”

I had to swallow the medicine the following week. Eliza was safe because mostly she was working as the receptionist, but I could see she was terrified, always trying to appear busy at the computer. For me, it was a different matter; I had to type all the letters that old Lowe had dictated, with headset on and nothing much to do other than type. The problem was that the old oaf was speaking quickly, with a German accent despite his forty-odd years spent in England and most of the time he was mangling the words. I could barely understand what in hell he was saying. The worst were the names, which he pronounced wrongly all the time. For those; I had to go and get out the old files to try to find the correct spelling, hoping that the previous secretary had done their job properly in writing it correctly. That was an endeavour not without risks. And then, at the end of the day it was “correction time”. Every time there was a mistake, the old boy became a fury.

“VAT ZE HELL? ZHERE IZ A MISTAKE HERE! Vhy can you not type properly? Vhy all the idiotz come to vork for me?”

Usually the tirade lasted for about thirty minutes, and answering back was of no use. Just mentioning that in that half an hour I could have corrected all the letters and been on my way home was of no use. His face often became red; then typically he started throwing files on the floor and pacing back and forth between his desk and the window.

As soon as he had finished, his wife would come out of her slumber-room, asking what had happened. And just when I’d become busy trying to correct the bloody letters, then she started, explaining to me: “We have to be precise, and those papers are going to be used in court, and if they are not correct it would be a major issue” – and blah-di-blah-di-blah.

I looked at Eliza and she shrugged, as if to say, nothing new on the western front.

Eventually, one day, he caught me in a bad mood. When he called me into his office for the usual “corrections”, I emptied my cup of tea on his desk and calmly and politely told him to f… off. Just to be sure, I repeated that concept to his beloved wife. When I left, Eliza was looking at me as if I were her personal hero. So I started a new career, by chance. As a personal shopper or, as I like to call it, Fashion Consultant.

We are trying to get the word out about the books. Colette is hoping you will help her and is willing to give away 2 print copies! Enter below. Thanks for sharing! Giveaway ends Sept 30.
a Rafflecopter giveaway

Have You Read Book 1 of the Series? 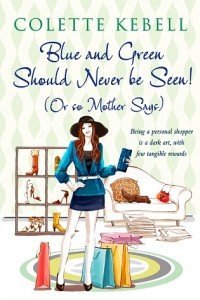 Read Book 1 In This Entertaining Series!

GiGi (well, Griselda Griswald actually, but everybody calls her GiGi) is a woman with a mission: to help people improve the way they look, increase their self-esteem, and eventually, make them happier. Being a personal shopper is a dark art, with few tangible rewards. Spread by word of mouth, her clients would never admit they needed her assistance. Not even if they were put under torture.

Let’s be honest, who would admit to being in need of a style consultant? It is like being an alcoholic: the first step is to admit you need help, and acknowledge that that pair of leggings, now that you are in your mid-fifties, do not suit you anymore.

When you have recognized it, you are on the path to recovery, and GiGi’s services will help you, despite her mother nagging that what she is doing is not a “real” job.

Excerpt from Blue and Green Should Never Be Seen

I have known Ritchie for donkeys’ years, way back from high school, and we’ve been best friends ever since. We share a passion for clothes and everything that’s fashionable. That gave him some trouble back then: the way he dressed was a bully magnet. At that age you have to be grey and conform to the uniform like the others; any deviation caused you to be a target. The fact that he was quite camp and openly gay didn’t help his case.

At that time I was a bit of a tomboy, and I couldn’t stand all those intimidators around him; I had to fight. I even went to the extent of bashing one around the head with an umbrella. The fact that I was a girl, and my brother was the toughest kid in the area, avoided further retaliations. Ritchie and I have been friends ever since, and he was my first and only choice when I decided to open this business. Sometimes he brings me back to reality; he‘s the one who also helps me to manage our poor finances, and keeps me in line when I’m overspending. And no, even if I am the boss, I’m not – if you know what I mean.

“Are you still trying to find me a boyfriend, by any chance?” I teased him, trying to wear my grumpy face.

“You should listen to me. The last ones you had were mostly failures,” he countered.

“Yeah, thanks. How come you always say that after we split up, and never give a warning in time?” That was typical of him.

“You have to learn from your mistakes, darling. What kind of friend would I be if I have to bitch about all your love affairs? No, dear: now you’re on your own. You will die alone and grumpy,” he laughed back.

“Yeah, sure. What about Norwegian-jumper guy; what does he want?” I questioned him.

“He needs the help of your fashion expertise – what else?”

Something wasn’t right. “How do you know he’s cute?”

The message is in your inbox, darling, and there’s a full picture. And if you don’t want him, I’ll take him.”

Be my guest, I thought: take him. Have a nice marriage in jumperland, and don’t come back to me begging for mercy and pleading to take you back. I’ll have them put you in retail rehab for at least six weeks.

I am the first to admit when I make a mistake and I realized I have done so (you see? I am open-minded after all). I understood what you wanted to tell me from the beginning. Now I know and I completely gave up the search for a Norwegian jumper. I still like them, don’t get me wrong, but it’s clear they wouldn’t suit my personality. That’s how great you are. You were able to make me look inside; discover my real nature and, most of all, dare!

I am a new person, thanks to you. I finally understood the underlying message you were trying to convey. I have been inspired by your example and I wanted to share with you a photo of the new me. Thanks to you, I feel we now can speak as peers. Two enlightened individuals sharing the same battles.

WHAT-THE-FROCK? I could not believe my eyes! The guy was fitted out with a brown squared tweed jacket, go-cycling trousers and woollen socks. Red. The black shoes seemed the only reasonable thing in what otherwise would have appeared as the perfect picture of Tinker’s grandson, straight out of Lovejoy. He even had the damn bow tie.

“Ritchieeee! Are you winding me up with this guy?” I shouted from my office. “Be honest, is this a friend of yours?”

Ritchie got up from his chair and walked, very slowly, towards my office. His back was straight, his head slightly inclined back, in his best “disgusted” attitude. If I didn’t know he was doing the upset game, I could have sworn he was saddened by my insinuation.

“What makes you think I’ve had anything to do with all this?”

“Well, the list is long. First, we have a history of you trying to get me dates. Remember a few months ago, that department store manager you wanted me to meet?”

“Guilty as charged!” continued Ritchie, shamefaced. “But he was cute.”

“And gay! We passed the evening talking about YOU!”

After being a Legal Secretary for about 10 years, I was on the hunt to find something else that I would find just as interesting. I found that in writing. Becoming an author has not all been plain sailing, though I thoroughly enjoyed writing and hope you like what you read.

I love fashion with a passion (pardon the pun) and therefore it is not surprising that my debut novels follow that theme.

I live with my husband in sometimes breezy Coastal Kent, together with our two dogs (a Westie and a Miniature Schnauzer) and our house rabbit.  Yes, all three play well together; though you wouldn’t have thought so.  Our rabbit has even taught himself to climb the stairs when he wants some company.  My husband and I enjoy cycling, particularly along the coastal path; breeze or no breeze.  If the wind is up it can be a bit of a battle, but good fun nevertheless.

“The Retail Therapist” is my second novel, though the first of a series of two thus far, the other being “Blue and Green Should Never Be Seen! (Or so Mother Says)”.