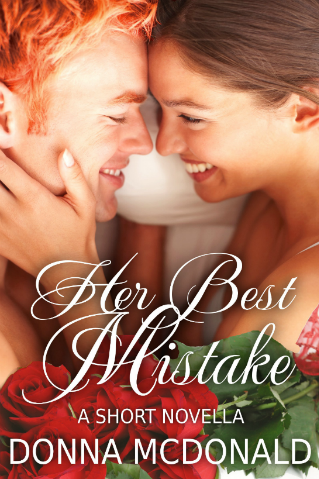 Maybe other forty year old divorced women were different, but Lisa Dennison was not the kind of woman to climb into bed with every guy she dated. Actually, she should never even have agreed to date younger man, Eric Roberts at all. She was flattered by the attention, but as a person, Eric never really interested her.

So how can she rationalize sleeping with Eric’s Harvard Archeology Professor twin? What she did with Finn was a mistake–a big mistake–even if it doesn’t feel like one.

Lisa tapped on the door of the suite. When there was no answer, she almost turned to leave but then reminded herself she was not that kind of person. She had made a mistake and now she had to try to make it right.

Taking the key card from her wallet, the key card that she was happy now she had neglected to turn back in, she slid it through the lock and stepped into the suite.

You just want to see him again<, a voice inside her insisted. You want to see if he’s naked and waiting for you.

The first thing she saw inside the room was the object of her thoughts. This time he was stretched out on the sofa, feet hanging over it while sound asleep. But unfortunately he was not naked. Lisa sighed with regret as she closed the door softly behind her.

Then she smelled him again. That damn shower gel or whatever it was.

Her toes curled and arousal hit instantly. Moisture gathered and this time her nipples pressed against the rough lace of bra. She looked down at her breasts in disgust.

Hello, girls. Where the hell have you been hiding for the last few years?

She dropped silently and dejectedly into a chair across from the man she now realized was Finn Roberts. She watched him sleep while she tried to decide what to do.

Finn looked like Eric in many ways, but now she could see there were some significant differences. They were semi-identical twins, Eric had said. Finn was a lot taller, probably three inches.

Lisa sighed as his curious gaze met her guilty one.

Maybe, Finn thought, he should be shocked at her boldness in coming into his room uninvited, but instead he was just happy as hell Lisa Dennison had returned. The illogical thought had him smiling.

“Hi,” Finn said, surprised at both the excitement and the happiness in his voice.

“Hi,” Lisa replied reluctantly, mad that all the butterflies in her stomach lifted into flight at his smiling hello.

They stayed like that for a few minutes, looking at each other in shock. Lisa shook her head again, mostly because she was still at a loss for the right words to explain what had happened.

“So should I apologize?” Finn finally asked, figuring one of them needed to say something.

“I don’t know. Have you done something you regret?” Lisa asked, trying to make a joke and failing.

“Well, last night I made love to an incredibly beautiful woman who it turns out is my brother’s girlfriend. I guess I should be sorry for that. But seeing you sitting across from me and wanting you all over again, I can’t seem to work up the proper guilt,” Finn explained.

Well, that was certainly putting the truth out there, Lisa decided, feeling her heartbeat double. The inner voice inside her was doing a happy dance. She ordered it to calm down and grow up.

“I don’t know what your brother told you, but one dinner and a chaste kiss goodnight last weekend doesn’t make me Eric’s girlfriend,” Lisa declared, sounding more defensive than she’d meant to be.

She sighed in irritation at herself for her rationalization of her mistake, realizing the same could be said about what she’d done with Finn. Crawling all over him in bed didn’t necessarily mean anything either.

But then what did sleeping with any man have to mean anyway? Nothing, Lisa told herself fiercely. It could mean nothing but the need to scratch an old itch. It could be just one of those casual, temporary things. People did that all the time.

Yet no matter how casual she told herself it had been, Lisa still couldn’t tear her eyes away as Finn Roberts sat up and looked at her, all his muscles fluidly moving at once. He was certainly graceful for a tall man. And incredibly strong, she remembered, sighing for a different reason as she watched him move around. She shook her head just to make herself stop looking at him.

“I admit that I did think you were Eric at first. You look so much alike, or at least you did to me yesterday. Not so much right now,” she co rrected.

She ran a hand through her hair, and then looked at Finn to see his reaction to what she had said. He was staring at her with an intense gaze that made her feel like she was being doubted. Out poured her thoughts without her permission.

“Okay fine. You want honest. Well honestly, after you put your hands on me, I didn’t care who you were because I hadn’t felt that way, been able to feel that way, in a really, really long time. Shit—maybe I should be the one apologizing to you,” Lisa said unhappily, crossing her arms. “Are you happy now?”

Finn thought the woman facing him now might just be the most honest woman he’d ever met. He could like her, he decided swiftly. And since she had told him a hard truth, he told her one in return.

“I’ve been divorced for two years, and you’re the first woman I’ve been with since my ex-wife,” he said flatly, enjoying the shock that came into her face. Her reaction almost made the last two years of abstaining worth it.

Lisa stared. Words dried up in her throat. She shook her head because she truly had trouble believing that this incredibly sexy guy had gone two years without female companionship.

How could she believe such a thing when Finn made her wet and aroused just by looking at her with that gaze that seemed to strip her naked?

She cleared her throat to speak, chagrined when no words came out. She tried again, finally managing a squeaky, nervous explanation of her own situation. “I’ve been divorced for several years myself, a little longer than you. I haven’t really felt any interest in sex for a while.”

Then appalled at herself for telling him all her secrets, Lisa leaned back and closed her eyes. “What I mean is that I have dated, but I haven’t. . .been with anyone. . .either. I’m sure that was really clear to you last night.”

She blushed at her confession. Why was she admitting more to Finn Roberts than she had even told her freaking OB/GYN doctor? The voice inside her jumped to her aid. Shut up, Lisa. Just stop talking.

Finn rubbed his nose and tried to smother his grin. “I tried to go as slow as I could. Did I hurt you?” he asked quietly.

“Hurt me?” Lisa said. She heard her voice squeaking again as she confronted the serious concern that was reflected in his face. “You’re serious, aren’t you? Okay—no. No, you didn’t hurt me. You were . . .”

She stopped a moment to consider her words. What could she say? How could she describe the experience of being with Finn without gushing about how amazing it had been?

“You were just the right amount of careful,” Lisa finally said at last, her need to reassure him winning out over her urge to protect her pride.

There are no reviews for this title yet. Be the first to review it.