Lead Me From Temptation by Kris Calvert

My author friend, Kris Calvert, has written an amazing paranormal suspense/thriller novel. It’s an edge of your seat read and I’m thrilled to feature book. It is available today. 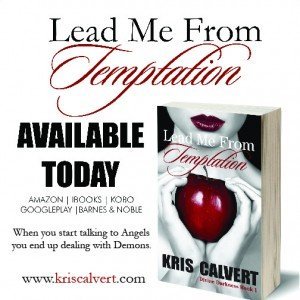 Indie Luce is burnt out, broke and Divinely Marked. A hospice nurse acutely aware of the Spirit World around her, she tries desperately to piece her life together after the suicide of her twin brother just one year ago. Taking a position to provide end-of-life care for one of the most powerful men in the world, she finds herself unknowingly in a battle for her sanity and more importantly her soul.

As a spiritual war rages silently onward, descendants of those like Indie are systematically tempted and taken and the momentum to tip the scale into depravity becomes impossible to stop. What Indie Luce doesn’t know about her past could place her future in the hands of Darkness.

Can the light of one selfless young woman hold the key to the delicate balance of good and evil? She is only one. But what if one is all that is needed?

A chill ran through my body as I stood at the foot of the bulky hospital bed. The feeling of otherness filled my open mind. I looked away from my fourteen-year-old patient, focusing on the loud floral wallpaper of her room. It had no doubt been hung to brighten the space now filled with bags of fluid, vials of morphine and pain patches. Nonetheless, it was where the girl would ultimately meet her fate. Meet her end. Meet her Maker.

Osteosarcoma had wrecked Erin’s tiny body—the body I was now charged with merely making comfortable. In eighteen months the stage-four bone cancer had turned the beautiful young girl from a champion volleyball player who’d never had a real kiss to a bag of bones draped in paper skin.

Erin was dying before she’d had a chance to live. It was tragic for those left behind, but a new beginning for her. Soon she would be crossing over.

I always felt the same at this point in my job. The hollow pit that filled my stomach was replaced by the tingling I felt in my body.

A second wave of chills ran the length of my spine as I gripped the railing of the hospital bed. I knew what was happening and I could tell by the look on the young girl’s face she knew as well. We weren’t alone.

Erin strained her neck as she tried to sit up, whispering one word through her dry cracked lips. “Gram.”

“I’m right here, Erin.” Her mother’s voice caught as she squeezed the frail skeleton of her daughter’s hand.

Erin again breathed the word into the air. “Gram.”

Her mother looked to me as if I had answers. I didn’t. After three years as a hospice nurse I had no idea what was on the other side. I only knew no one made the trip alone.

“Gram is what she called her grandmother.” Erin’s mother said the words and stroked her daughter’s face.

Erin reached into the air with both arms as if she was expecting someone to embrace and carry her away from the world. In and out of consciousness, it was the most movement we’d seen from her in a week. To her distraught mother it seemed as if another moment of delirium was taking place—the episodes had become more frequent and were lasting longer over the past few days. Erin knew better. I knew better.

I pulled my attention from the girl as the inviting warmth of the light behind me enveloped my body. Another chill overcame me and I physically shuddered as I breathed in the light that surrounded us.

Erin looked to me, expecting me to acknowledge what she was seeing. I did not, but instead gave her a reassuring smile to let her know that everything happening was just as it should be.

“Erin, it’s okay to let go,” her mother repeated as she took her daughter’s upstretched hand. I watched as three generations of strong women held each other up in the beautiful moment of selflessness. Erin would soon be gone but I knew death was just a new door opening in the life of her reoccurring soul.

No matter how many times I stood witness to the phenomenal occurrence I was always amazed. Friends, relatives and others who’d crossed over would come back to assist with the transition of the living to the other side. It was something a hospice nurse who’d been on the job for any length of time had experienced. The difference was I saw what the dying saw—I saw Spirit. I was fine with the older folks finding their way home, but it was the young people—the babies, the children I had a difficult time watching. Everyone with a divine soul deserved a chance at an earthly life—at least in my eyes. Even those who’d made poor decisions—like my brother Jacob.

“I love you, Erin. It’s okay to let go.” The mother repeated Gram’s words as she choked on her own tears. I watched as the older woman who’d come move forward, placing a hand on the shoulder of her own daughter. Immediately the young girl’s mother released the tension she held onto so tightly with a sigh.

Erin took one last breath, and as she slowly exhaled left the imperfect world behind her. Her physical presence diminished as her soul vacated the sick earthly body she left behind. With a nod in my direction and a smile for her grieving mother, Erin was gone. She was free—free from the pain that held her captive.

I slowly walked around the bed to the mother and placed a single hand upon her shoulder just as I’d seen Spirit do.

The mother looked up to me as tears fell from her swollen eyes and onto her white shirt and simply nodded. “It’s over,” she whispered with a sob.

But I knew Erin’s existence was far from over. It was just beginning.

Lead Me From Temptation II from Kris Calvert on Vimeo. 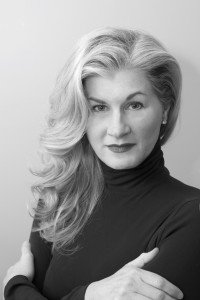 Kris is a former copywriter and PR mercenary, who after some coaxing, began writing novels. She loves alliteration, pearls and post-it notes.  She’s married to the man of her dreams, who just happens to be a fabulously talented composer. They live in the South where he scores her crazy and completely out-of-the-box life.

She’s Momma to two kids, now in college – one at the University of Kentucky, and one at New York University -Tisch. She is also responsible for one very needy dog. When she’s not writing, she’s baking cupcakes.

Want to know more? Visit Kris at her website.