Marcus 582 is the third book in this futuristic Science Fiction and Fantasy series from USA Today Bestselling Author Donna McDonald.

No matter what his cybernetic mind concludes, nothing in Marcus Kell’s restored life is logical.

Marcus 582 still remembers all the things Kyra says a restored cyborg is supposed to forget. Things like what it was like to be captured and tortured while fighting to save a country that a decade later doesn’t care about him.

But then, neither does his former wife. She gave up on him long ago. Now she’s remarried and his children think someone else is their father.

As far as he’s concerned, Marcus doesn’t have much in his life worth living for except the task of guarding Rachel 235. The woman irrationally refuses to accept that she’s been converted into some crazy cyber scientist’s new cyborg prototype. Accept it or not though, her denial won’t stop the bad guys from trying to re-capture her. Just ask Peyton.

Sympathy is a stretch but Marcus understands why Rachel doesn’t want to be a cyborg. After all, her conversion wasn’t voluntary like his. But Rachel wants a life without any cyborgs in it, including herself, which will never be her reality again. It’s time she got used to that fact.

Why is he so determined? Because he’s already lost all he can stand to lose in his life. He refuses to lose Rachel too.

ABOUT THIS SERIES – Set in the future, this science fiction action and adventure series explores military boundaries in a tale of created cyborgs and genetic engineering. It contains strong romance elements for paranormal, science fiction, and urban fantasy romance fans.

Head down to avoid the curious stares his tats always drew from passersby on the pedestrian track, Marcus walked into the apartment building next door to Norton Industries. Even though he visited the location daily, the barely sentient AI bot sitting at attention behind the welcome desk always treated him like he’d never seen him before. Marcus found it difficult to believe the building guard unit didn’t come with enough memory storage to record and retain visuals for tenant recognition. Norton probably had some jacked-up reason for programming the front desk guard to treat everyone as a stranger, but their logic certainly wasn’t his. He dreaded seeing the abject misery on Rachel’s face every time she came home and the insufficient bot made her feel like a stranger. Her eyes loss all shine and her mouth turned into a frown which irritated him because he had to go home and leave her that way.

Marcus repeated Rachel’s statement aloud to see if the words sounded any more believable when he said them. All the woman did was go to work at Norton and return home. How did she make a date without him knowing about it? Rachel had no more social life than he did—unless it was someone at Norton hitting on her.

Back when he was officially monitoring her for Dr. Winters, he’d had Eric set up some discreet surveillance on her living quarters. When the situation changed, he’d left the monitoring equipment in place. He’d done so for complicated and illogical reasons admittedly based on an inappropriate interest that kept getting harder and harder to fight. His reasoning—though it remained vague in his mind—was now causing a sinking sensation in his gut.

At the time he made the decision to keep monitoring Rachel, he’d had enough problems to deal with in his life. He had been working then and was still working to get his children not to be afraid of him. Thankfully their stepfather was a decent man who helped ease his way back into their life.

It had also taken him more time than he’d expected to completely accept he’d lost his wife. She hadn’t wanted him to have the Cyber Soldier enhancements done in the first place. They had fought often and bitterly about his decision long before his actual conversion, but he’d been unwilling to send his military unit off without him. In the end, he’d proceeded without her agreement.

Accepting the loss of his one real marital relationship had hurt badly and turned into a pain that had brought tears to the surface during many sleepless nights. The loss had revealed in a harsh way how much illusion had been behind what had kept him sane during the war.

In the last seven months, he’d had to shed many more ideas. The life he’d had back before the enhancements were done was nothing like the life he had now. The war had ripped his real marriage apart with no chance of him fixing it after being put in the Cyber Husband program anyway. Infidelity was infidelity to the mother of his children, whether consensual on his part or not. She had filed all the paperwork to divorce him and married someone else shortly after the war ended. It might even have happened before he’d been assigned to his first contract wife. He’d avoided looking at the dates.

Logically, he couldn’t blame his ex for moving on, but the reality of never again being with his family had still been surprisingly hard to accept. Unlike the memories of the four women who’d bought him—memories he had willfully relegated to data storage—the many wonderful years of his marriage before the war were permanently stored in his human recall.

Today it seemed like he was going to lose another woman. Rachel’s announcement about having a date meant he’d taken too long to make up his mind about acting on his growing attraction to her. Referencing his lingering shock as the most convincing evidence he had about having heard her words correctly, he conceded all incoming data pointed to only one conclusion. He had stayed longer in Rachel Logan’s life than he should have and now he was going to suffer as he watched her move on to other men. He rationalized his inaction as waiting for a sign she was healing from Brad’s abuse.

Eric had been on his ass about making a move, but he’d never figured how to approach Rachel about the possibility of the two of them dating. She was a lot younger than him and a lot less jaded. Plus, she hated him being a cyborg worse than his wife had. Hell, he was nearly a hundred percent sure Rachel still hadn’t accepted the fact that she was a cyborg. Maybe her processor lacked that level of logic circuitry. He had no clue what went on in her human mind or her cybernetic components. No one around her would ever suspect what Brad had done to her anyway. All they would ever see was a short skirt and long legs and…hell. He needed to stop dwelling on the image of having those legs wrapped around him. He didn’t need that kind of torture.

Having regained her capacity for speech, Rachel certainly hadn’t lost any time telling him to get lost. But her announcement about dating still irked him. When had she made the necessary social contact with other men which would have led to a date? It was totally illogical to obsess over her having done so, but it was going to nag at him until he discovered how it had happened.

Rachel had been traumatized by the worst kind of cyber geek. Now the woman abhorred most technology and refused to carry a handheld. How in the hell had the guy gotten into contact with her again if she no device? Even her parents were avoiding her.

There was only one conclusion that made any sense, which was that she was lying, but he couldn’t handle thinking Rachel could be so desperate to get rid of him.

Her announcement had to be a reaction to this morning. He’d slipped up and let her catch him checking out her legs in that damn short skirt. It had been impossible not to gawk like some lovestruck kid. Maybe he should feel more guilty about the discomfort he’d instantly sensed in her, but he didn’t.

Part of him wanted to make her aware…wanted to see how she would react to him. Unless his sensors were malfunctioning, Rachel had liked his masculine attention. Unless her heightened reaction was because he was the only male she’d been seeing on a regular basis. His cybernetics scrambled trying to analyze the situation, but conjecture about feelings wasn’t the same as hard data proven with action. Short of throwing herself in his arms and demanding a kiss, Marcus didn’t know how the hell he’d know if her feelings were reciprocal.

Groaning low in frustration, Marcus glared at the scanner arch Rachel had disappeared through. His cyborg side pointed out he had the clearance to follow her to her work area and demand an explanation, but his human side leaned toward leaving things as they were a bit longer. Her anger was not something he looked forward to having turned on him.

When the guard bot had addressed her by her registered cyborg name, Rachel had looked ready to dismantle the friendly and competent unit. What would she want to do to him if he tracked her down and demanded she date him?

Contemplating her possible reactions to such a confrontation caused his processor to send flashing lights through his brain. Too many of those would lead to a headache. Sighing in momentary defeat, Marcus rubbed a hand over his face, his human side breaking through completely as a purely male sexual frustration took over every cell in his underused body.

He hated internal conflicts—all cyborgs did. Truthfully, he’d not had one moment of peace since being put back in touch with his emotions.

With the prospect of watching Rachel date men other than him, he didn’t see his situation improving any time soon. 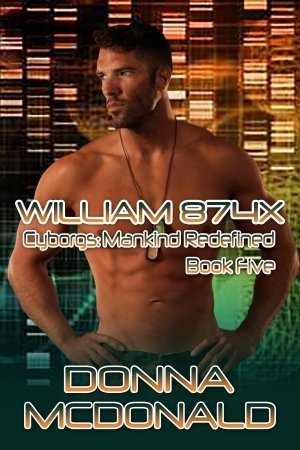 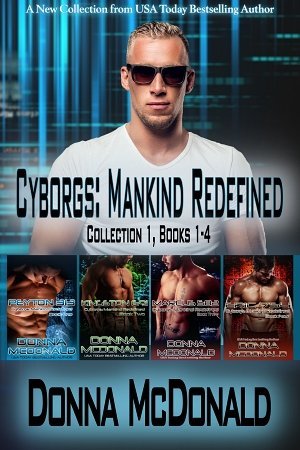