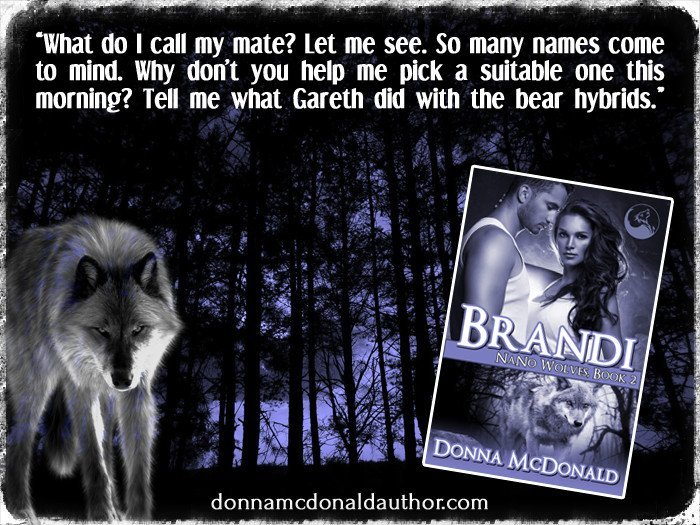 Now available. Get your copy today! 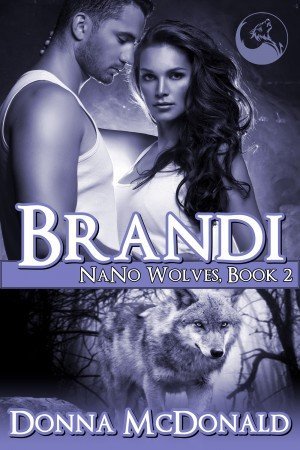 When Brandi woke, she was strapped to a medical gurney. Déjà vu washed over her, making her feel stupid and inept. At least her clothes were still on this time.

Looking around the room, she saw sinks, IV stands, and extensive lighting mounted on movable fixtures. Science had never been her favorite subject, but everything she was seeing pointed to the fact she was in another freaking lab.

“Well, shit… ” she said, staring at the ceiling. When she got free, she was going to kill Travis Black Wolf’s betraying ass, maybe even before she found out what the hell he was doing here.

She wiggled her wrists and found them bound securely. Squirming, she felt pain where Travis had stabbed her with a giant hypodermic needle full of knock-out juice.

When the door opened, she turned her head to glare at the person who entered. Her wolf strained inside her, wanting to attack. Brandi snorted and tested the restraints on her wrists again. They were canvass and strong, but not nearly as strong as she was now.

A tall, thin man wearing glasses and a falsely apologetic expression approached the bed. She could practically hear him rehearsing his lines before he spoke.

“Welcome Agent Jenkins. I’m Dr. Santiago. I’ll be doing the research on your conversion experience. It would save us a lot of trouble, and you a lot of drugs, if you decided to cooperate with our investigation. What we do is for the greater good of non-hybrids and hybrids alike. I apologize for our rather unorthodox methods of recruitment. We weren’t sure you would go along with an official transfer. However, your agent identification is now in our database, so you might as well make the best of it. Your previous handler has reluctantly, but finally, agreed to release your contract into our care.”

Branded snorted and looked at the ceiling. “You must be smoking something really good. Being drugged, apprehended, and strapped to a gurney for examination does not qualify as a work transfer. You’ve made me your prisoner, Dr. Santiago. I don’t intend to be one for long.”

She saw him hug the computer tablet to his chest and ponder her like a bug he’d pinned to a board. Dr. Santiago was just another Crazy Crane. He was also human and easily killed—wolf or not. Her gaze narrowed on his throat as she contemplated ripping it out. Her wolf danced inside her, ready to help. She just might let it.

“Most come to us with some reservations about our department, but I’m afraid you have no choice, Agent Jenkins.”

Brandi smiled. It made him nervous just like she hoped. “Okay. Since I’m strapped down and you’re not, I guess you have a point. What do I get if I agree to become your test subject?”

Santiago sighed. “I am not Randall Crane, Agent Jenkins. I have no wish to make more of you. I just want to see what he’s done and figure out how to counteract it.”

Brandi snorted. “Who are you trying to bullshit? You save you’re not Crazy Crane, yet you want to reverse a process you don’t even understand. And in reversing it, wouldn’t you automatically learn how to create more of me?” She watched him shrug. His non-answer made her very mad.

One minute Santiago was looming over her. The next his tablet tumbled to the concrete floor as she landed on top of him with all four paws pressed into his chest. She growled low and bared her teeth to his wide, frightened gaze. The smell of his urine suddenly filled the air around both of them. His terror didn’t satisfy her or her wolf, but she knew smelling his blood would.

She opened her mouth and bared her teeth again, preparing to close them around his neck. When the door opened, complete shock robbed her of her blood lust. Morphing back to human form, she never even felt the familiar pain of changing. The buzz of nanos working under her skin went mostly unnoticed as she stared in shock.

“Gareth? What are you doing here?”

Gareth rubbed a hand over his jaw as his gaze took in the dangling straps Brandi had broken when she’d shifted. “Would you believe I came to rescue you?”

Brandi snorted and fisted her hands. “My boss sent me to Feldspar to investigate Crane—not the wolves. The dipshit who just pissed himself intended to change me back. I was about to make sure he didn’t get the chance.”

Gareth rubbed a hand over his head. “I saw that… but you can’t kill him. He works here.”

“It won’t be loud. I can do it quietly with my bare hands and no one will know. I don’t need my wolf.”

“I know. Sound carrying is not the reason. He’s a scientist… and he works for our side.”

Gareth walked into the room cautiously and closed the door. He could smell the adrenaline still pumping through her. He could also smell her happiness to see him. What a mess. What a fucking mess. Reaching down, he extended a hand to the man on the floor and helped him up.

“She… she… surprised me,” Dr. Santiago stated.

Gareth nodded as Santiago positioned himself behind him for protection.

“I know. She wanted to kill you and is trained to do it in more ways than you’re used to dealing with, Doctor. I suggest you wait until you have her full cooperation before doing any testing. It takes Brandi a while to come around to new thinking.”

“Very well, Agent Longfeather. I’ll just leave you to your… debriefing… while I go change. Good to see you again. Hope you’re enjoying your retirement.”

Gareth nodded as the doctor hustled around him and out the door. When his gaze returned to Brandi’s, her arms were crossed. Santiago had revealed all his secrets in his comments.

“Holy hell. You’re in on this too. If I had my gun on me, I would shoot you without giving it a second thought.” Brandi ran a hand over her head as she glared. “Between Lane, Travis, and now you, I’ve had about all the back stabbing I can take for one day. Is Matt an agent too?”

Gareth shook his head. “No. No others from our pack. Just me. I didn’t know Travis was an agent until the day you left. I called in and was told he had offered to help induct you. I was told to stand down and let it happen as planned.”

“Induct me into what exactly? Does our government have some kind of secret society that collects the misfit creations of its power mad scientists?” Brandi demanded.

She watched a somber Gareth nod and frown.

“I guess our department is something like that. It’s a monitoring service for human hybrids of any kind. Each new one is researched and studied so a strategy can be developed to handle them if one ever went rogue. There are many others like you, including those whose experimental situations didn’t turn out as well. They’re all in the database of the organization. They’re even chipped.”

“Chipped? You mean I’m chipped like a  vet clinic does to a dog or cat?” Brandi shook her head and groaned. “I swear my taste in men gets worse every year. We slept together for two months. I even told you the truth about what I did for a living. Do you know many people I ever disclose my life to? None, Gareth. None. Because the only man I ever told before you used the information to try and have me killed.”

Gareth sighed. “I know. I wish now I had told you, but I couldn’t bring myself to do it. I knew it was going to be like this when you found out. I guess I was being a coward. I’m sorry, Brandi. I should have warned you… or something.”

“Or something? Lane sent me to Crazy Crane and delivered me up as a test subject. You let me come back here knowing damn well I would be collected as a lab rat the moment I arrived. And now, thanks to you and fucking Travis, they already know all there is to know about me. Have I got everything about right, Gareth?”

Gareth rubbed his jaw. “I didn’t know the part about your boss setting you up. But that doesn’t surprise me. That’s how most agents get involved in hybridization experiments.”

Brandi turned, grabbed an IV stand, and deftly swung it in Gareth’s direction. He ducked of course, but she had anticipated his block, and his reaction. When he dove to wrestle the stand from her grasp, she quickly released it to him. Catching him off-guard, she then grabbed his free arm and twisted it behind him until she had enough leverage to put him on the floor. The IV stand clanged on the concrete as it fell from his grasp.

If Gareth had changed into his wolf during any part of their struggle, it might have been a different fight altogether. Regret must have made him careless. She wasn’t going to let it do the same to her.

“Pay attention, Gareth. This is how agents break up with each other.”