I’m writing a new trilogy for Robyn Peterman’s Magic and Mayhem Universe. The Baba Yaga Saga followed Hildy and Carol from childhood to the Baba Yaga test. The new trilogy, which I’m calling the Baba Yaga Adventures, picks up when they’re just getting started in their witchy careers. Book 1, “Whole Lot Of Shiftin’ Going On”, is about Hildy’s first big crisis as a healer. You’re going to love the fun and laughs in this light paranormal comedy romp. 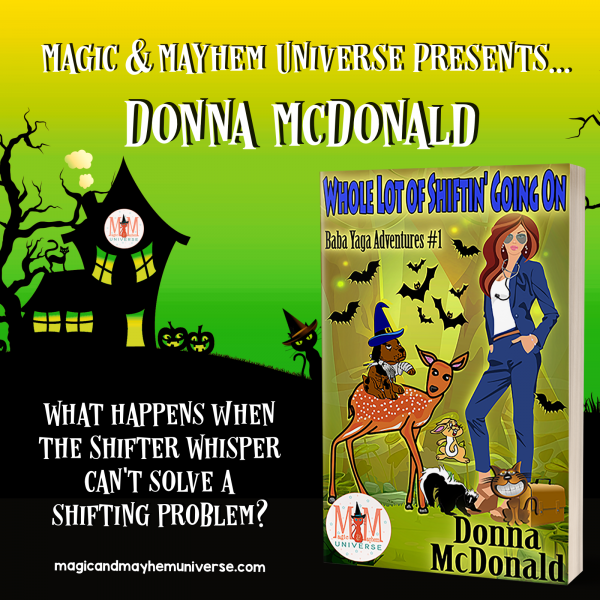 What happens when the ultimate Shifter Whisperer can’t solve a simple shifting problem?

Being a Shifter Whisper is the life Hildy chose to devote her witch power to, but it hasn’t worked out as she’d hoped.

Her sexy bear mate? Gone. Chuck’s committed to someone else in a way she would never ask him to ignore.

Her Prada wardrobe? That’s gone too. Donated and sacrificed by order of Gaia. You don’t need much to live in a cave, but wearing a blanket every day is a real low point.

Her sense of humor? Totally gone. Her life is too sucktastic to laugh about the death of all her dreams.

Why is she now back in this crazy shifter town and living in a creepy, run-down house that belongs in a horror movie? Because Gaia wants her there to solve a problem. There’s a whole lot of shiftin’ going on, but none of it is normal. Shifters are turning into nightmare versions of their animals.

And if she fails to find a way to heal them? According to the Baba Yaga, the Goddess Morgana, and Gaia, every shifter in the world is doomed.