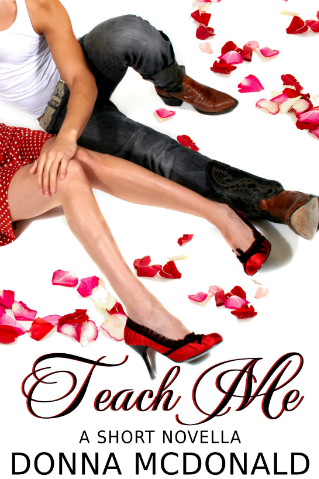 Her Old Boyfriend Has Amnesia, But She Has The Biggest Headache

Teacher Leslie Mercer returns to her hometown to help her high school boyfriend recover from a head injury. While Murphy is stuck in the past, Leslie finds out his younger brother has had a crush on her for years.

The now all-grown-up Grayson Webb says he has been waiting all his life for his chance to be with her. While Murphy recuperates, Gray asks her to teach him all the things he’s never had a chance to learn.

But when their impromptu summer school ends, what will happen then?

As Leslie strapped herself in, Gray closed the door, walked around, and climbed into the driver’s side. He started the truck and waited while the air conditioner kicked in to cool the vehicle. Both of them sighed in pleasure as the cool finally hit them. They looked at each other in sympathy.

“Every July I make plans to move somewhere with cooler summers, but every February I’m glad I live in Texas,” Leslie said.

Gray laughed. The unrelenting climate was hard to endure, but the heat caused by the woman next to him was his biggest problem at the moment. He was struggling to find a balance between not looking at her and blatantly staring.

“Murphy’s staying at the rehab center ten minutes from here. I need a bit more time than that to explain his situation. Let’s head out towards the Blue Bell Creamery and circle back around.”

Gray could tell from Leslie’s frown that she really meant that. Leslie was not looking forward to seeing Murphy again.

“I got the impression Mama had to talk really hard to get you to come back here. I was already at the house last night when she called,” Gray said, keeping his eyes on the road as he shifted gears. “I know it didn’t work out between you and Murphy, but are you still mad at him for something specific?”

Leslie sighed and looked out the window. “Murphy ever tell you why we broke up, Gray?”

Gray shook his head. “He didn’t say much, just moped around for months. When your folks moved, he said that was it and you’d never come back to Brenham. I remember him dating Shelia Watson all summer after you left.”

When Leslie laughed, Gray could tell it was not because she found anything funny. She turned from the window and looked at him with eyes that were dim with some remembered pain.

“I guess you’re old enough to know the truth, Gray. I caught Murphy doing the deed with Sheila the weekend before I left for college. I walked right up to his car while they were in the process. As you can imagine, it’s not one of my best memories.”

He could have told Leslie about the other girls as well, the ones before Sheila, but he still loved his brother enough to keep silent. And if he told her, Leslie would probably get back in her car and leave as soon as she could.

Gray shook his head from side to side. “Murphy said you were mad at him because he wasn’t going to school like you were.”

Leslie snorted at hearing Murphy’s rationalization for their break-up. “Well, instead of me accusing him of lying, let’s both just pretend Murphy was trying to spare you from reality.”

When Gray shook his head, she sighed. “Sorry if I messed up your image of your brother as a nice guy, Gray. Murphy was a nice guy in most ways. That’s the only reason I said yes to your mother. Well that—and I am truly happy to get to see how you turned out. Are you a heartbreaker like your brother?”

Gray laughed, knowing she’d be shocked if he told her just how bad his luck in love had been. “God, no. I never had Murphy’s luck with women. I dated a little in college, but not much. How about you? Anyone special in your life?”

He watched her closely, waiting with stomach jitters to see what she would say. What was it about Leslie that reduced him to nothing but nerves? She had always had that effect on him.

“I was engaged for a while when I was about your age.” Suddenly realizing the past had repeated itself, Leslie laughed and smacked her forehead. “Come to think of it, I broke up with my fiancée when I caught him trying to kiss one of my friends at a party. Before and after him though, I dated some great guys. Nothing took. At the moment you could say I’m in a dry spell.”

Gray looked out his own window so she wouldn’t see how happy he was at the news. He wheeled the truck into the Blue Bell Creamery parking lot to turn it around.

“So tell me about Murphy’s condition,” Leslie finally said, studying her fingers instead of looking at Gray.

Gray stopped the truck and shifted into neutral. “The trauma of the head injury jogged his memories around a little, but all his doctors think it’s temporary. At the moment he’s imagining himself to be eighteen again and still dating you. Certainly Mama and I are walking evidence that time has passed, but he seems to be in denial about us. Sometimes he seems to be trying to take it all in, but then he gets stubborn about accepting reality. It’s a bit like Murphy has one foot in the present and the other in the past.”

“Does Murphy remember that we broke up?” Leslie asked.

“He’s not saying much about what he recalls. He just keeps asking when you’re coming by to see him. We told him you don’t live in Brenham anymore, but he refused to accept the fact.”

Gray studied her to see how she took the news.

Leslie pinched her nose and rubbed her eyes with her hand. “How awful would you think I was if I said I really don’t want Murphy’s drama in my life?”

“I’d gladly take you back to your car and tell Mama that it didn’t work,” Gray said, shrugging. “The doctors expect Murphy’s mind will catch back up as soon as he heals a little more. Time may fix this without your intervention.”

Leslie looked at Gray and saw he meant what he’d just said to her. Now if she could just find a way to be hard-hearted enough to leave.

“Your mama doesn’t think the same way. I guess I came for her as much as for Murphy,” Leslie said sadly, again cursing her soft heart for saying yes.

“Are you afraid because you might have feelings for Murphy still?” Gray asked. He needed to know what he was up against and whether or not he was going to eventually have to compete with his own brother.

Leslie burst out laughing at the thought. “Lord, no. Murphy got a hell of lot farther with Shelia Watson than he ever got with me. I’m not carrying a torch. I’m just still mad. Murphy always said that if we did anything more than kissing he’d have to marry me. I’m just ego stung about it—that’s all. And this is way too much information for you to know about me and your brother.”

Leslie let her words drift off, embarrassed that she’d said so much to Gray. He was a good listener and it was easy to forget he was Murphy’s brother.

Gray lifted a foot, pushed in the clutch, and put the truck in first gear. When he had his nerve up, he turned to look at her. “Maybe it was a good thing that it was Murphy you were fooling around with back then. If you’d made any offer at all to me, I’d have been a father at fifteen and you’d probably be working on our fourth or fifth child by now.”

Leslie burst out laughing again, and Gray grinned at her honest amusement.

“I’m not kidding. You had to know I had a bad thing for you even back then,” he said.

“Maybe,” Leslie said, the laughter dying at the seriousness behind the grin. “I suspected you had a little crush on me, but you were just a kid.”

There are no reviews for this title yet. Be the first to review it.