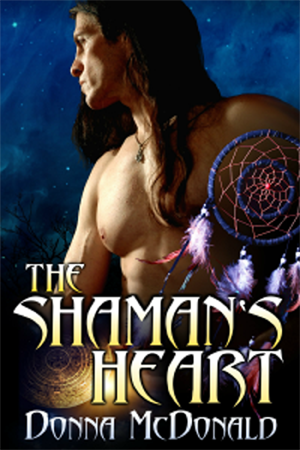 Former brain surgeon, Sidra Hawk, knew it didn’t matter what title anyone used when describing her profession. None of the monikers fit her anymore. Her medical career was more broken than her heart. Death and grief had taken too much of a toll for her to go back and face more of it in her work. What could Dr. Samuel White Elk, or Running Wolf as he liked to be called, know about her pain? Just because she had dreamed of him helping her didn’t mean that she had to buy the entire fantasy that their dream sharing meant something magical.

She definitely wasn’t “Shaman Star Eyes” as Running Wolf and his students like to call her. Sidra knew she was just another broken person walking the planet alone. Nothing mystical could change the cold reality of her family’s death. Grieving them was all she had left. Her textbook doctor-patient attraction to the kind, but incredibly sexy, native healer was simply bad timing. Her growing lust only proved how pathetically normal she was.

She watched him point to the stairs.

“My consulting area is at the top. We can take the elevator if you like.”

“Stairs are fine.” Despite having walked more that day than she had in months, Sidra followed Running Wolf as he turned and started climbing.

On the top floor, he motioned her into his office and over to a sitting area on the far side of the room. Then he walked back to close the door, effectively sealing them both inside.

Sidra chose a seat in front of small coffee table with a bowl full of smooth crystals on it. Like there had been at the massage facility, there was some lovely music playing in the background. She looked around at the degrees on the wall, the shelves with brightly colored books as well as old tomes, and at the table lamp burning softly.

She smiled, a bit shocked at how it seemed to stretch her face. “Is everything in Sedona so quiet and lovely? Or does it take a lot of work to create this ambiance?”

Running Wolf laughed softly at her dryly offered observation. “I create the space I need to work in and provide my own accoutrements. This is the kind of environment I choose to live in and work in each day. Do you find it appealing?”

Sidra studied Running Wolf’s face, watching his facial expressions, seeing the pride that he was careful to temper as he spoke. “Yes. I guess I do. And I should thank you for last evening. I don’t know what you did or how it worked, but I slept all night and late this morning. I haven’t done that in a long time without a sleeping pill. Thank you.”

Running Wolf inclined his head in acknowledgement. He spoke in his native tongue first, and then smiled as he included the English. “My words were thanks to the spirits for helping, as well as to Aaron and Tim for praying. It is an honor to help you.”

Sidra’s gaze fixed itself to Running Wolf’s hips and legs as he rose and went to a shelf to retrieve a book. She might have laughed at her sudden interest in his toned denim covered backside, but she didn’t have time. Running Wolf brought a book back to her. It was well worn and had some pages earmarked. Flipping it open to a certain section, he handed it to her to read.

She reached into her purse for reading glasses. Fitting them on her nose, she read Hopi Legends of the Holy People. Closing the book in surprise, she studied the cover.

“Hopi? Aren’t you Lakota? I read your bio on the internet yesterday.”

“Yes—I am Lakota,” Running Wolf said, “but there was a time just before the English settlers came when the native tribes were communing very closely. When they did, they discovered that they were all similar in their fundamental beliefs. From that time, legends of our origins have been shared. Many native cultures believe in the holy people who live among the stars and occasionally come to Earth to show us the way. Or as our western scientists would say—they come from other star systems to advance our understanding.”

“Interesting,” Sidra said, but was wondering why he was showing it to her. “I’ll have to read about these holy people sometime.”

Running Wolf tapped a finger on the book. “Sidra, I’m showing you this book because I believe this is your history. Though your tribal connection is not obvious to the world, I believe you are here from the stars on a journey as a healer. Your first name even means ‘of the stars’.”

“You can’t really be serious.”

Sidra laughed at his nod and shook her head from side-to-side in denial. Last night was great, but she was going to have some serious problems if Running Wolf’s treatments leaned too far into mystical stuff.

He walked to take the seat across from her again.

“You seriously believe in reincarnation?” Sidra laughed out loud, not able to care how rude it was to do so while he was still speaking. In fact, she was tempted to get up and leave right now, no matter how nice it was not to feel the slightest urge to cry.

“Many like you do not remember their origins, but I can help you discover the truth of your power. It will show you why you have not chosen to take your own life, no matter how tempted you have been to do so since you lost your family,” Running Wolf said.

Sidra set the book on the table in front of her, pushing it firmly away. “We have not spoken enough for you to draw such a conclusion. You cannot know my inclinations until I have revealed them to you. Hell, I don’t even know them myself. How could you?”

“Sidra, look in my eyes. See the reason I took this name,” Running Wolf demanded. “The wolf is my sacred animal. He lends me his ability to see the truth about people. Look at me.”

She watched Running Wolf’s pupils dilate and change, saw a steely glassiness drop over his irises, darkening his gaze until it seemed to bore into her depths.

“I will never intentionally lie to you, so you can always trust what I say. Now place your palm on top of mine and feel the power. I want to share it with you,” he said, holding out both hands palms up to her across the table between them.

The urge to run returned with more force, but Sidra chided herself for feeling that way. She could rise and go to the door whenever she wished, but what would that accomplish? She would be looking for another therapist in short order now that she knew real help was possible. At least Running Wolf had stopped the incessant crying. Wasn’t that worth indulging his quirks a little?

Wishing only to get the sanity test or whatever mind game he was playing over with, Sidra reached out and placed her hands palms down on his. The connection felt like she’d been plugged into an electrical outlet in the room. Something flashed behind her eyelids and light exploded through her mind like someone turning on a overhead lamp in the operating room. 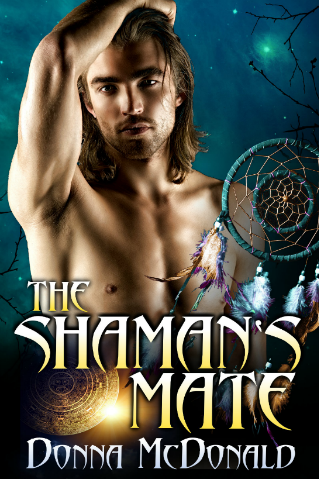