What’s In A Name? Demon vs Daemon vs Symbiont

Over the last couple of years, I have gotten a lot of reader email from my cross genre fans who tell me they have an strong aversion for the word “demon”, so strong it has kept them from trying this series. The Forced To Serve series is a science fiction action and adventure story, and not at all about a “demon from hell”.  “Daemon” (aka demon, daimon) means “an inner or attendant spirit or inspiring force” among other things.

Let me explain it another way. Did you ever watch Star Trek: Deep Space Nine? There was a character who had a “symbiont” installed in her. I used the term “demon/daemon/daimon” because I didn’t want to copy a term from Star Trek. Jadzia Dax was an officer who had all of her memories and all the symbiont’s. Jadzia was a Trill alien who joined with Dax the symbiont alien. That kind of blending of two beings into one always fascinated me so I wanted to create my own.

I recently changed the spelling of the word across this series to the term “daemon” hoping that future readers will bring a mythological context to mind when they see the books. I’m hoping to put out another in the series this year. Book 4 is currently being recorded in audiobook.

Book 1, The Daemon Of Synar, is currently offered as a free series starter. I’m offering Book 2, The Daemon Master’s Wife, free when you join my mailing list.

The Daemon of Synar is a story about an alien being who requires a host body to live in any real sense. The captain of my spaceship, Liam Synar, is the alien being’s overseer by family inheritance. Liam puts the daemon into his wife, Ania, when she nearly dies saving him from his traitorous brother. Liam does this knowing full well Ania will hate him for it. He has avoided telling Ania about the situation for a couple of years, but now is faced with having to fess up to what he’s done.

It is action and adventure, space opera, romantic comedy, and science fiction all rolled into one. 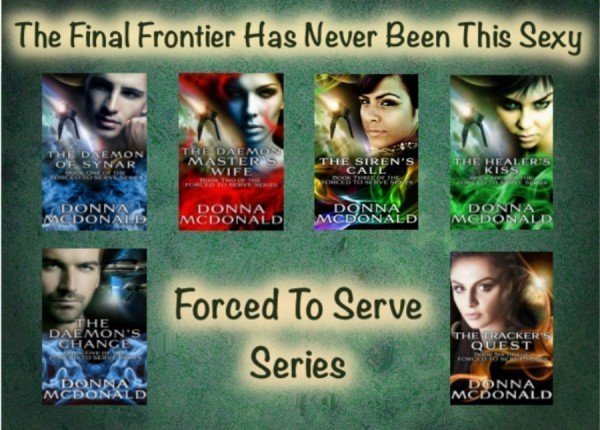