Why I still offer some ebooks free

It wasn’t long ago a fellow author asked me this question at a conference.  In the age of Kindle Unlimited and other reader subscription services where a person can pay one price and read all they want, the questioner was wondering why I still offered the first books in my series for free. Weren’t my free downloads less than they were a year ago? Yes, they are less, but I can still answer the free question in two words — New Readers.

In the big ocean of contemporary romance writers, I am but one author fish. There are many, many great authors publishing new work all the time. I know this because I read voraciously. My free books let new readers try my writing without losing the money they might have spent on an author they already know they love. If they like the free book which is usually Book 1 in a series, then they can go on to the rest. If they love the free book, and I get lucky, my readers tell all their friends.

Since Black Raven’s Designs revised my website and organized it so beautifully, I’ve heard many times from staunch reader fans — “Oh, I didn’t realize you had all those other books!” That’s why I decided to post about my free books on the website blog just in case.

If you’ve already download, read, and bought more in these series, you have my gratitude forever. Shares with friends are always appreciated too. 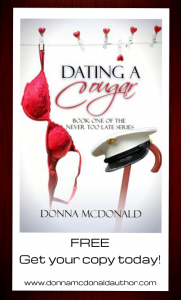 Book 1 of the NEVER TOO LATE Series

After deciding to end her sexual hiatus, 38 yr old retired Marine, Casey Carter, is looking good to 50 yr old lingerie model, Alexa Ranger. Granted,the age gap bothers her more than him, but a normal relationship is totally out of the question anyway because Casey is related to her daughter’s boyfriend. The last thing Alexa needs is another talk-show worthy drama in her already complicated life.

Alexa tried to pull away, but Casey wouldn’t let her. She felt his firm grip on her wrist pretty much everywhere. She sighed and swore softly. She didn’t know whether to thank Casey for making her feel excitement again or run like hell from him because he was too young to be making a move on her. She tugged her wrist trying to break free.

“No. Don’t run away this time,” Casey said, moving to stand in front of her. “Are you still looking? I would really like to know, Alexa.”

This is a great character study in romance and the first of the series. I can’t wait to read them all. I definitely recommend this author and her books to anyone who loves a good romance and likes to laugh. And keep an eye out for more from this wonderful lady. ~ Jesse V. Coffey, National Examiner and On Air Host of Edin Road Radio 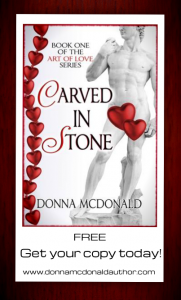 Book 1 of the ART OF LOVE Series

They say you marry a person and not a family, but tell that to a Larson bride.

Even though his sons tease him about not dating, and his ex-wife thinks he is still hung up on her, 53 yr old retired principal and stone sculptor, William Everett Larson, is glad he waited to date until he found 47 yr old high school art teacher, Jessica Daniels. He admires Jessica for her courageous feminist art and for how she has dealt with the trauma of her life. While dating works for her, Jessica assures him she is incapable of lasting love. Will refuses to believe it’s true. He’s sure the only part of Jessica damaged by her past is her heart.

Will felt her acceptance of his kiss and him in every cell. “Too bad you’re not interested in me, Jessica Daniels,” he said, stepping away from her warm body. “I’m sure interested in you.”

Will pulled a twenty, and the condom he’d been carrying since he met her, from his pocket. He threw the twenty on the table in one of the few dry places left, and then reached out and tucked the condom into Jessica’s apron pocket. “Here’s your tip. Maybe it will fit the math teacher, but I doubt it.”

To find myself so deeply invested in the characters as I was, truly made this book that much better for me. I highly recommend Carved In Stone as a romance novel for the “rest of us”. Her writing proves that there’s deeply sexual and passionate love to be had after fifty if you stay true to who you are, and I look forward to the next installment in the series. ~ Leanna, Two Lips Reviews

Donna McDonald’s characters feel like people you know—or wish you knew. They are real people with real problems who face life’s challenges with courage and optimism. The result is an uplifting read full of humor and hope. You won’t want to miss the experience. ~ Sondra Allan Carr, author of A Bed of Thorns and Roses 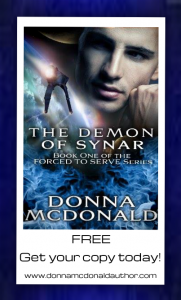 Book 1 of the FORCED TO SERVE Series

Book 1 begins the adventure. Being captain of his own rescue ship is the life Liam Synar always dreamed of living. Being master of a dark, demonic alien is not.

Coveting Malachi’s enormous power, Liam’s exiled evil brother hunts his ship, wanting to capture the alien that Liam’s life mate unknowingly hosts. Putting Malachi inside Ania two years ago had been an desperate act to save her when she almost died saving him. If only the damn demon hadn’t killed again, Ania would still be safely unaware of her fate. Now Liam has no choice but to tell Ania the truth and face the wrath of the only female he’s ever loved.

Intense with detailed world building, The Demon of Synar is a compelling read packed into a novella sized piece laced with enough emotional angst that I sometimes forgot this was a sci-fi story. ~ Leanna, Two Lips Reviews, Recommended Read

I don’t normally read this genre because I am not really into futuristic stories set in space or stories that are about demon possession, but this one caught my attention and I thought I would give it a try. I am glad that I did because it was a good read. I can’t wait to read the sequel ~ Isis, Sizzling Hot Books

“I put Malachi inside you because I could not watch you die when I had the power to save you.” Saying it aloud was such a great relief that Synar wanted to sink to the floor at Ania’s feet.

Ania backed away from him further. Power to save her, Liam had said. It was always about power with males. Despair wrapped around her like a cloak to know she had tied herself to this one.

“But don’t you see? What you have done to me—this is death. The laser blast I took for you did not hurt this much. I would gladly have died.”

Not everyone is familiar with the sub-genre of “space opera”, especially when combined with romance. But if you love watching Science Fiction TV shows such as Firefly and Star Trek, then you are already a fan of this sort of story. Space Operas usually contain a wide range of adventure story elements, but also tend to include ongoing love stories between characters. What I like best is that they allow me, as a romance author, to indulge my love of happy endings, but only after a good mission where at least some of the crew ends up fighting the bad guys. Fight scenes are a lot of fun to write. Just like in space opera TV shows, the characters in my Forced To Serve series reappear from book to book because they are crew members of the same spaceship. However, there is a full romance with a new couple in each book as well. The one exception to this is that Book 1 (64,000 words) and Book 2 (110,000 words) together are the full story of Liam and Ania’s romance. Reading both books is recommended to get a full feel for this series.